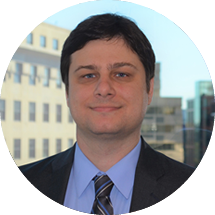 Ross E. Fishbein has been practicing law with Alden Law Group since June 2015.

Prior to joining Alden Law Group, Ross provided pro bono legal assistance through the Employment Justice Center to low-wage workers on their pro se labor and employment claims.  He also counseled and represented indigent torture survivors in their asylum applications before the US Citizenship and Immigration Services.

While in law school Ross served as a competitor and Executive Board member for the Alternative Dispute Resolution Honor Society.  He was also a Dean's Fellow, conducting research and writing for future publications and developing class curricula.

Ross is licensed to practice law in the State of Maryland.