Home / Who We Are / Michelle F. Bercovici 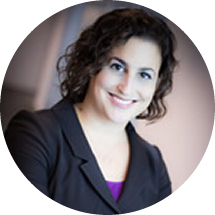 Michelle Bercovici is a partner with Alden Law Group and represents federal employees across the globe as well as private sector and local government employees in Maryland and the District of Columbia in employment discrimination, retaliation, and whistleblowing claims. Michelle joined ALG in 2007.

Active in professional associations, Michelle has served in several elected and appointed leadership roles at the District of Colombia Bar, beginning with election to the D.C. Bar Employment and Labor Law Section in 2010, and subsequent service as Co-Chair from 2013-2015. In 2013, Michelle was selected as a member of the Inaugural Class of the John Payton Leadership Academy of the District of Columbia Bar, an intensive leadership training program. Michelle was appointed as Chair of the D.C. Bar Council on Sections in 2015. Michelle currently serves as an appointed member of the D.C. Bar Board of Governors’ Leadership Development Committee (2016-present), and on the D.C. Bar Communities Committee, which oversees the Bar’s twenty-one practice area-specific communities. While serving on the Leadership Development Committee, Michelle played a vital role in a major initiative to transform and rebrand the Bar’s Sections into the D.C. Bar Communities, for which she and other Committee members were honored in 2017 with the D.C. Bar’s Frederick B. Abramson Award, which recognizes significantly contributions to the Bar and its members through innovation or unusual dedication.

Michelle has shared her extensive knowledge of labor and employment law with the legal community as a speaker and moderator in multiple continuing legal education courses with the D.C. Bar, National Employment Lawyers Association (NELA), and the Metropolitan Washington Employment Lawyers Association (MWELA). In 2015, 2016, 2017, and 2018, Michelle was named a Rising Star in the Washington, D.C. edition of Super Lawyers.

Michelle has been a member of the D.C. Bar since 2009 and was admitted to the Maryland Bar in January 2008. Michelle is also admitted to practice in the U.S. District Court for the District of Columbia.