Home / Who We Are / Dominick Schumacher 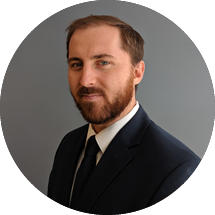 Dominick D. Schumacher has been with the Alden Law Group since May 2018. He began as a Law Clerk and became an Associate in December 2019. He received his J.D. from Georgetown University Law Center in May 2019 and was admitted to the Virginia State Bar in December 2019.

As a law student, Dominick was a member of Georgetown’s Appellate Litigation Clinic, working on immigration and prisoners’ rights cases before the 4th, 11th, and D.C. Circuits, and the Virginia Parole Board. He served as a Fellow in the Legal Research and Writing Program and as an Executive Officer and competitor on the Barristers’ Council Appellate Advocacy Team. He is also credited for his work on Newsgathering and the Law, fifth ed, focusing on the public’s First Amendment right of access to information and documents from executive branch agencies and civil and criminal judicial proceedings.

In 2016, Dominick received his B.A. in Political Science and Economics with a cluster in American Sign Language from the University of Rochester. There, he interned for U.S. Senator Charles E. “Chuck” Schumer. In both 2015 and 2016, he was named an NCAA Scholar-Athlete All-American by the Golf Coaches Association of America.

As of February 2022, Dominick is the reigning mini-golf champion of Alden Law Group.

Dominick D. Schumacher is licensed to practice in the Commonwealth of Virginia and the District of Columbia. He is a member of the Metropolitan Washington Employment Lawyers Association.